I've been so fascinated by raw foods that I've decided that I'm going to 'go raw' at least one day a week, if for no other reason than to learn new 'un'cooking techniques. 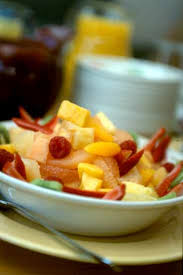 This morning I started my day with a large, beautiful bowl of summer fruit salad and a large glass of nutmilk. Somewhere in the middle of the meal I decided to dip my plums into the vanilla nutmilk -- Holy Mother of Yum! Vanilla and Plums is a great combination.

On another note: Vanilla and Mangos...not so good. *shudders at the memory of curdled nutmilk*

For lunch we went to our usual Chinese restaurant, where I feasted on watermelon and Kimchi. For those of you who don't know, Kimchi is a fermented cabbage slaw with a lot of kick (from crushed red pepper and garlic).

Of course somewhere along the line something went terribly wrong...and I got glutened (suspecting hidden soy sauce?)...I dunno. When I make kimchi I don't use soy sauce, so... it's all speculation.

For Dinner I was really in the mood for some pasta. I've read over and over again that summer squash, zucchini, and young coconut are really great for pasta, so I took one of my handy-dandy summer squashes, peeled it and then used the peeler to shave linguini noodles from the squash. This yielded about a pound of 'pasta' -- I'd probably make twice as much in the future, because you get huuuuuuungry very quickly with this kind of food.

Now you might be wondering about the mint: It adds a complexity to the dish that is welcome and makes up for the subtle 'meat' flavour you'd expect from the sauce.

Now I had a great tasting 'Bolognase'... but it was ice cold.

This is where thinking outside the box paid off for me. The theory behind raw cooking is that you really don't want to cook anything over 110 degrees (120 degrees is the max). I figured that most people don't want truly 'hot' food -- they usually wait for it to come to a comfortable temperature. All I needed to do was to get this food to a comfortable (read: warm) temperature, and it would be golden!

To do this I set my oven to 110 degrees, made up my plates, and put them in the oven till the food was warm (this took me all of 7 minutes). Bam! Instant, palatable raw food.

Another trick: add some crushed red pepper instead of 'parm.' the heat of the pepper really does fool the mouth (in the aftertaste) into thinking it's had a 'hot' meal.

Of course when you're eating this way you can really afford to do the dessert thing, so I cranked out some sorbet made from fresh, wild Blackberries that my children picked.

Blend the agave nectar and blackberries. Sieve out the seeds. Freeze in your ice cream freezer or, alternatively, whisk every 15 minutes for 2-3 hours in a bowl. Cover with plastic wrap or some airtight seal and let 'cure' at least 3 hours.

Posted by Slightly Off Balance at 7:49 PM

You rock! I think DH is going to make me a dehydrator- apparently Alton Brown had a show on it. Got to love Alton Brown. Anyway, soon I too will be playing with my raw foods cookbook. The pasta sauce sounds good. Last night I was watching Dinner Impossible and I SWOONED because they had this amazing PEELING device- looked like an apple corer or SOMETHING and they turned zucchini in to LASAGNA SHEETS. I want one of those special peelers sooooo badly right now. And- next day you post about squash/zucchini pasta. Hmmmm. We must really be sharing a brain wave or something. Anyway, love the raw food once a week thing. How is the husband responding to these dishes? Mine has a certain... skepticism... re: raw food. Men.
-Sea

Do what I do: don't tell him. LOL. I've found that I can let things 'slide' if they;re warm. He might be skeptical about squash pasta... but I've served him spaghetti squash for years, so as long as it's approx. the same temp as anything table-ready, he's game. The burgers I made the other day were fine straight from the dehydrator/oven (I fried them for added colour)... and he didn't have a problem eating them. He just didn't know they were 'raw food'... same thing with the but milk.. the cookies... the....

If you think about it, most things don't have to be mentioned (Like ice cream and homemade cereal), but with entrees, I'd play it smart and market it differently. If I said "tday's raw food day, we'd have a mutiny." I don't say a word...just make the stuff.

like I said, I'm beginning to think that temperature has tons to do with the skepticism of most wary-people. 110 or 120 degrees is still pretty darn warm, actually. But for whatever reason a big trend in raw food is room temperature or colder... I say if It's technically raw, then serve it at the maximum allowable temp! (I'm talking soups, casseroles etc, here). Thinking outside the box, y'know??

Yeah, it's crazy how in tune our minds can run. I'm still cracking up about the ratatouille...


Let me know how the whole raw thing goes with your cutey....