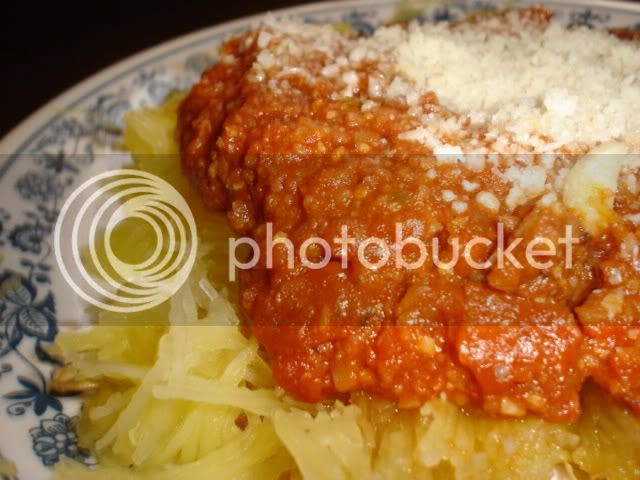 I fell in love with the raw vegan way of preparing 'meat' out of nuts and eggplant, and began to experiment with cooked versions of the same thing.

I've made this meat sauce several times, with the same reviews -- it looks and tastes very, very, VERY close to the real deal. Which is a good thing if you've got a Carnivore in the family.

THe spaghetti quash on the other hand... well, that was at the request of my six year old, and the Carnivore wasn't too happy with that.

Tonight I altered my usual 'meat' sauce, by using almonds instead of walnuts, and adding two green peppers to the food processor. It was a more subtle sauce -- less meat, more marinara -- and it was soooo good.

We served this with imported, grated Parmeseano-Reggiano, but shaky cheese or a nice vegan nurtitional yeast/almond cheeze will do nicely.


Meaty Marinara
1 pound eggplant
about 2 c walnuts or almonds
2 green peppers (optional)
2 tbsp gf soy sauce (I hear that all soy sauces made by the traditional method are actually GF, but if you're nervous, stick with a safe one)

Chop all of these on the pulse section of your food processor, or grate/chop finely. Stir into a nice organic marinara sauce (we bought one...Ragu Organic).

Serve on top of cooked spaghetti or spaghetti sauce.


Posted by Slightly Off Balance at 5:52 PM

So, let me get this straight -- you use raw eggplant??

Do you peel it?

Do you slice it first and put salt on it to leech out the bitterness?

I don't salt it first at all.

I've done it both ways -- stirring the raw eggplant/nut mixture into the sauce at the last minute and heating through...

and cooking it on very low heat for about 30 minutes.

I like it both ways. With the walnuts it's better the second way. With the almonds the first. Go figure.

Salt it and tell me which you like better!

oh my goodness... raw eggplant. Blink. Blink. Ok, paradigm adjusted now. The spaghetti squash is cooked, right? I am so intrigued that I think I have to try it... but must not tell the DH that it contains eggplant. I only recently seduced him into liking eggplant (oops, sounds racier than intended) with my eggplant parmesan... this after years of unabated eggplant hatred on his part. ;) Myself, I don't understand it- eggplant is yummy! Looks lovely!

THanks! I was shocked raw untreated eggplant could be good... then somone taught me that a really fresh, well-hydrated eggplant has no real itterness to it. Bitterness is a sign that there hasn't been enough water during the ripening. Your best best is to buy asian eggplants (that's what we do).

Someone jsut also suggested that I dehydrate the eggplant first. I'll let you know how that goes.

About soy sauce... Soy sauce made in both China and Japan contains copious amounts of wheat, and as it is fermented (like beer) rather than distilled (like hard alcohol) I do not believe that the gluten protein is adequately dismantled. I have personally been gradually poisoned by wheat based soy sauce, so I don't trust anything but real, live GF soy sauce. And with options like San-J wheat free tamari or Bragg's tamari, who needs gluten soy sauce anyway. ;) I know Kikkoman likes to make claims about its gluten status, but then so does Budweiser- and I don't really trust either one. Maybe when I see FDA approved gluten free labeling on these suspicious products, I'll consider the issue again... but I really have had bad experiences.

It will be interesting to see what comes of the new labeling laws.

Bragg's btw... you do know it's a natural form of MSG?

Isn't natural msg in lots of things? like carrots? I heard that once, am not sure if it is truth or fiction, but it's a good story. Back when we would try to eat out at a Chinese restaurant in Japan, I would get msg "high" from the food- strangest feeling... thirsty and giddy at the same thing. Anyway, we stopped when it became clear I was getting contaminated, sniff. I guess the stuff used to be made from wheat gluten but it seems that in Japan they've changed sources- not that it matters, but it's interesting. Freaky stuff, msg. It's in a lot of american processed foods under alternative names... autolyzed yeast, Hydrolyzed Vegetable Protein (HVP) etc. Craziness, I tell you, craziness. Luckily I don't seem to react to it, but a lot of people do.
-Sea

yes, it is in things naturally, but not in anywhere NEAR the concentration of hydrolized-autolized-anylized stuff.

"0.3 percent in spinach and tomatoes to about 10 percent in parmesan cheese and 20 percent in dehydrated soup mixes. Some consumers also mix additional MSG into foods in the form of sauces. This may be strongly influenced by cultural food preferences. In Korea and Taiwan, for example, the average adult consumes six to ten times more MSG each day than the average person in the United States."


I wonder, sea, if you've got any asian background, genetically.

Who, me? I'm part alaskan native, and there are arguments about land bridges way back when. But I do try to stay away from msg now, despite a brief and dangerous flirtation with it in Japan. (Mostly dangerous because of the cross contamination issues at a Chinese restaurant, msg health considerations aside.)

Now here's the thing I'm wondering- as I'm no food scientist- what is the difference between the process used by Braggs and San-J.. both are fermented, right? So would San-J also be high in natural msg? (hee hee, natural msg- sounds like such an oxymoron.) Gorsh, I've really hijacked your comments thread... oops! I'm just interested, as always. :)

LOL!
no prob -- comments are the best part.

San-J is naturally fermented for long periods of time, like wine, then bottled as a 'whole' food. Not an exceptionally high source of msg.

Bragg's on the other hand is manufactured by soaking soybean slurry in hydrocloric acid, then neutralized with a sodium salt. The concentrated acids (inclduing glutamic acid, keep reading) are then skimmed off, and this substance is bottled. It doesn't contain MSG-per-se as in manufactured, but rather extremely high concentrations of glutamic acic...ie. naturally occurring msg.

Hope that answers your question

Hi Naomi!
Have I mentioned I love your blog, comments and all? lol.
You know, put that way, Braggs really doesn't sound very appetizing. I'll be havin' some SOYBEAN SLURRY now with my rice....hmmm. Oh dear. I always did have more affection for San-j. Of course, neither product is good for you with all the sodium they contain. Food for thought. I tend to use Braggs for my "organic health food" dishes, and San-J for my Chinese or Japanese dishes because they have such distinct flavors.. Braggs can ruin (IMO) an authentic asian dish, but adds personality to some vegan/veggie dishes. Oh well- it's still better than La Choy. (shudder)