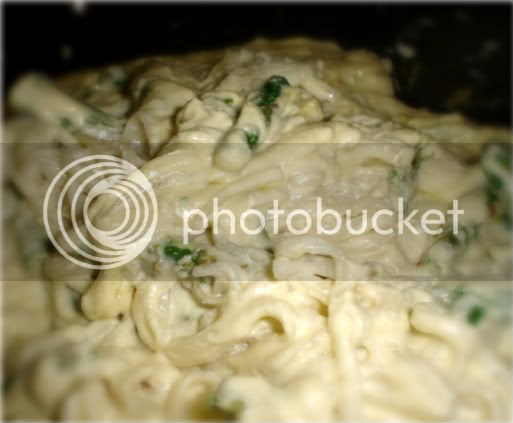 After four long years of waiting, our first crop of asparagus was finally ready to harvest - asparagus, you may not know, takes so many years to establish that it almost makes one wonder if it's worth it to plant in the first place.

After four long... (did I say long? I meant loooooooooonnnnnnnng) years of cultivating the plants, you'll begin to harvest asparagus - lots of it. And you'll keep harvesting this (free!) veggie for the next twenty years. More if you're willing to do the back-breaking labour of splitting the roots.

I love asparagus. Every which way. In lemon sauce, steamed, boiled, baked, fried in tempura - I don't care how it's done. I love it.

I sat there wondering what on earth to do with this first harvest, and it hit me -- alfredo!
Rich and creamy, ultra dreamy loaded with fat and calories - who doesn't love the buttery, cheesy goodness of a real alfredo sauce?

Well, vegans for one.

Or those with dairy intolerances. What's a gal to do?

I came up with this lovely alternative for alfredo, and it passed with everyone - even The Carnivore. Everyone assumed it was the normal dairy version.

Traditional alfredo is pretty straightforward. Extremely high-fat-content butter (European style) is warmed and melted with plenty of high-quality Parmesan, that's thinned with just a bit of pasta cooking water. The starch in the pasta water gives a certain body to the sauce that would otherwise be lacking.

In the United States, things get a little more complicated. The lack of high quality butter (most of our butter has too high a water content to work) and parm makes it difficult for the average homemaker to make a good sauce. Also problematic - people tend to use too high of a heat or the wrong proportion of ingredients - and they end up with a gloppy-oily mess or something tasteless.

Because of this, most restaurants (and home recipes) use a flour-thickened cream or milk-based white sauce into which plenty of parmesean has been melted. Garlic and cayenne pepper are the secret ingredients of the most popular restaurants' alfredos.

People tend to crave what they know, and assuming people have rarely if ever had a traditional alfredo (I have...wow! Amazing), I went for the more commonly available taste and texture.

Macadamia nuts are the secret here for texture - They're superstars in the vegan world and great for subbing for dairy cream.

A combination of vegan 'cheeze' fave nutritional yeast, sunflower seeds, salt and garlic (and a tiny pinch of cayenne) takes care of the taste. One thing I advise - I've gone a little light on the salt. Traditionally Parmesan adds a very salty dimension to food, and your taste buds may insist on more salt. Feel free to add it at the end, by sprinkling over the plate.

Better Batter Flour adds body, and olive oil adds the final touch of fattiness to the dish and helps round out the flavour.

Cook noodles according to package directions.

In a saucepan saute asparagus with 1/4 c olive oil for 2-3 minutes. Add alfredo sauce and heat through. Stir in olive oil. Stir in hot noodles and serve.
Posted by Slightly Off Balance at 6:29 PM

Looks good. And seems healthier than the tofu and soymilk version I've tried before.

Thanks! We avoid soy at all costs.

Oh yum! As it happens, I don't avoid soy, but I love this creative version. I've been daydreaming about white sauces and nutritional yeast lately- but nut sauces are good too! Too bad my macademia nuts fell prey to evil nut preying buggies recently....(shudder, you don't want to know...)

Thanks! Wonderful recipe! I switched the macademia nuts for cashews. I have tons of food allergies, and this recipe sure helped!
mo

Question! How many does this recipe serve? Thanks!
Cheryl