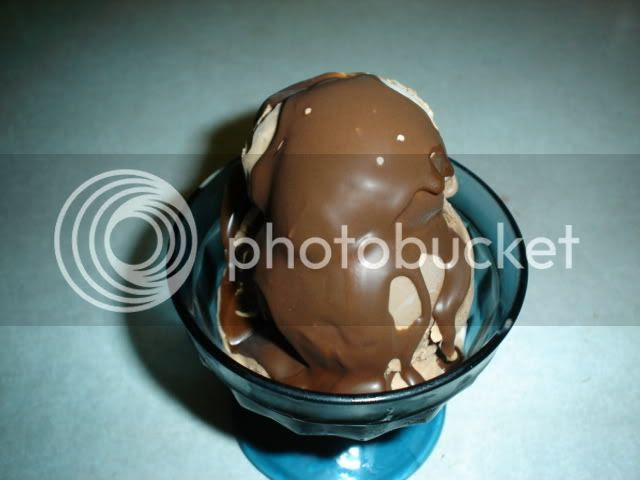 See the incredibly guilty looking dessert on the left? That's health food, ladies and gents! I kid you not.

When I was growing up I was literally addicted to Magic Shell Topping. You remember Magic Shell, right? It was a really sweet, watery chocolate syrup that miraculously hardened on ice cream to produce a coating that was strangely reminiscent of Klondike Bars.

The taste was weird... kind of like really bad Easter candy. And that's what made it so good.

As a kid I remember sneaking into the kitchen to add extra Magic Shell to my ice cream. This degenerated into pouring Magic Shell into a spoon and freezing the spoon. Things only continued to spiral downhill from there. Somewhere along the journey, I found myself drinking the stuff from the bottle, warm... I told you I was addicted.

Tonight the craving got too bad, so I decided to make some for my family. How hard could it be, I mused...

Magic Shell's main ingredient seems to be oil -- all kinds of scary, hydrogentated oil. Scary, hydrogenated COCONUT oil.... I wondered if I could use coconut oil (the real, unrefined, beautiful kind that I could literally eat plain) and real chocolate and achieve the same results.

Obviously you can guess from my pics that................I DID IT!!!!!!!!!!!! And the best part? It's good for you. Coconut oil is a great thing to take for metabolism and general health, and darker chocolates are also supposed to be good for you... so I can rationalize this one into eternity.

The weirdest part? It tastes 'right'... guess that taste was the coconut oil all along. For those of you who are wondering, 'right' is weird at room temperature, and divine frozen.

This shell goes only satiny smooth and very thin, and freezes to a perfect shell-like finish.

Now, if only someone would stop me from drinking it from the canning jar (old habits die hard, I suppose). 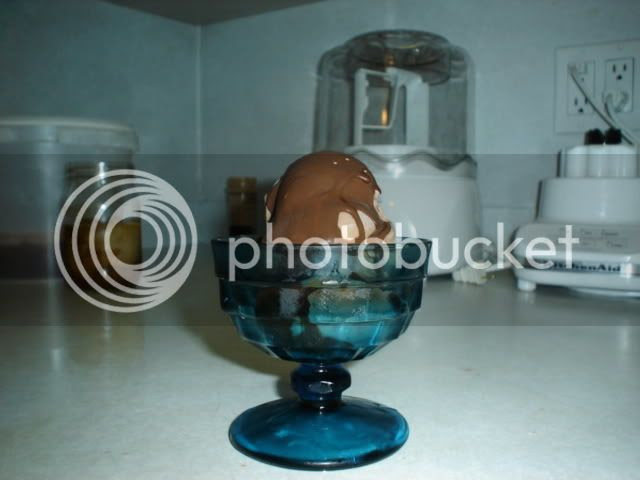 about 1-2 cups semi-sweet, bittersweet, or dark chocolate chips or chunks

1. Melt the coconut oil over very low heat in a small saucepan.

2. A little at a time, whisk in the chocolate chips, until the mixture resembles very thin, chocolate syrup (those of you who've had Magic Shell know exactly what this looks like). We needed about 1 1/2 cups.


That's it! This stuff stores at room temperature. IN a cold room, make sure to heat over very low heat on the stove.
Posted by Slightly Off Balance at 8:59 PM

I Am Gluten Free said...

Ok, if I wasn't hooked by your mock fish sticks, I am now officially hooked by the magic shell. After going GF almost two years ago, I've been finding that dairy bothers me, so I've been trying as hard as I can to go dairy free as well. And pre-GF, my husband and I used to LOVE to go to Dairy Queen and get the vanilla softserve dipped in the chocolate stuff (like the Magic shell). Well, I can't WAIT to try this. Thank you for figuring it out!

You'll find this will go on and be about the same thickness as that stuff -- WOW, it's good. I made a raw coconut cheesecake with this as the topping... GIRL SCOUT COOKIES. Golly. So good.

Yeah, so I'm pretty sure that yours is actually fattier than the Smuckers stuff.
I've been researching this and coconut oil isn't usually hydrogenated. Hydrogenation is to solidify otherwise oily fats, which coconut oil is not. It's solid on its own.
The actual Smuckers stuff uses "winterized" coconut oil. That means that it's held at about 74 degrees and all the solids are skimmed off. The solids at that temperature being the most saturated fatty acids. What's left is an oil that is slightly less saturated and liquid at room temperature. Hence the magic in the "magic shell," you don't have to heat it up and it's shelf stable.
Still looks tasty, though, excellent work.

More fat doesn't mean less healthy. If I know exactly what's going into it I would way rather eat it. This is so exciting. Thank you!

I'm planning to use this recipe to make Vietnamese coffee ice cream 'drumsticks' for a party. I can't wait!